Exchange a few words with Susanna Martucci, or attend one of her talks, and you will immediately understand that you are in front of a champion, not only because of her successful projects, but also because in her job she combines entrepreneurial intuition and a uniquely human touch, an ability which is rare to find today. Today Susanna is the CEO of Alisea S.r.l. Società Benefit, an Italian company that makes design objects - some of which are world-famous - using an entirely sustainable production chain. Discover with us her story told through 6 objects which are significant for her and tell us about her her career and a life ruled with strength and determination. 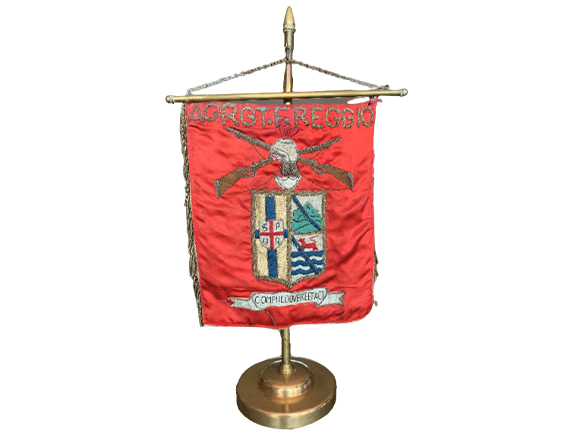 1. Pennant from Scianna Military station in Palermo. I am the third daughter of a general of the army, if I were a boy my parents would have been happier! I grew up with the motto "do your duty and be silent". As a child, I lived in barracks with my family. In the evening, I would fall asleep listening to the Silence and wake up early in the morning with the flag-raising. This pennant was given to my dad in 1963 when he commanded the Scianna Barracks in Palermo, it has always been at the entrance of our house. Now it is at the entrance of mine. I believe that my strong sense of duty and that of my sisters originate from here. 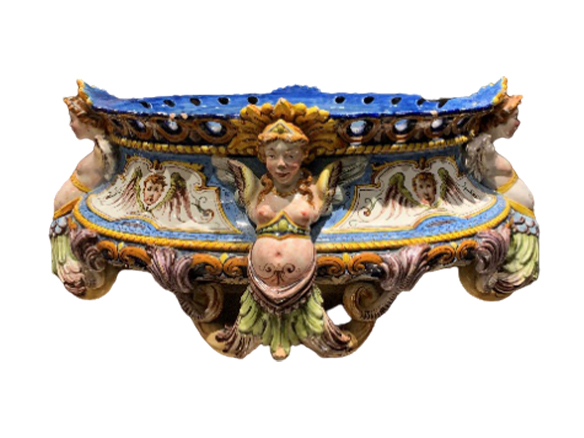 2. Planter by Ginori Società Ceramiche, 1896. This planter has always been there in my life: it is more than 100 years old, Richard-Ginori was still called "Società Ceramica Richard" and was owned by Giulio Richard. It was made before 1896, when Società Ceramiche Richard became the Richard-Ginori. It is an object that I have always loved very much. Since I was a child my parents and sisters always knew that when we would leave our father's house, that planter would come away with me. 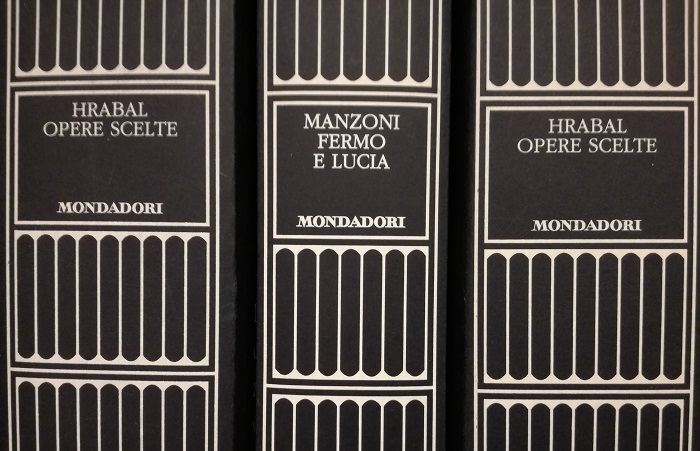 3. I Meridiani Mondadori... my first real job was with Arnoldo Mondadori Editore. A company to which I owe my professional and commercial training. At Mondadori I learned the basics of what has then become my job: sales. It was 1981, I had just graduated and in those years Mondadori invested and believed in young people and with them imagined, experimented, and created new business models. Thanks to the Mondadori Family, I entered the world of culture, art, and the magical world of children. I worked for Mondadori Walt Disney for the launch in Italy of the first Disney audiovisual workshop for children, for the study of the English language. 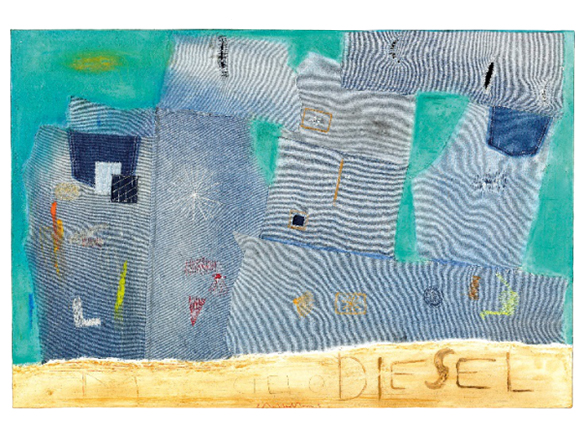 4. Cielo Diesel, by Raffaele Rossi, 2000. A unique work by Raffaele Rossi for Alisea, Cielo Diesel, 2000, is made using the scraps of a Limited Edition of Diesel jeans, themselves unique works. Cielo Diesel perfectly sums up my transition from the original activity to the new one: from the last period "Mondadoriano", when I was dealing with contemporary art, the painting represents the moment of transition to what has become my company. From that moment with Alisea I began to go "factory by factory" on my territory, to ask what they were throwing away of their production in order to rethink how to give life and dignity to waste materials through creativity, art, and design. 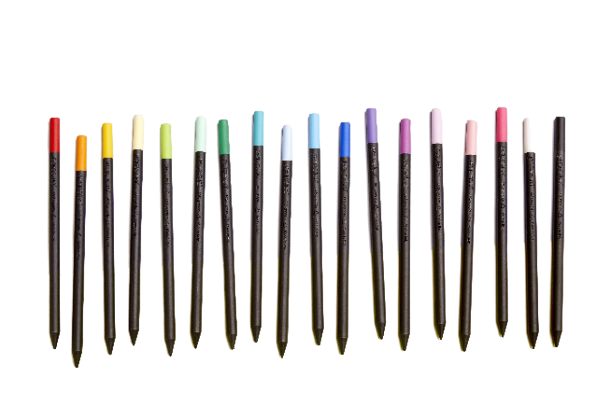 5. Perpetua the pencil made with reused graphite. My 3 children consider her the fourth sister, the little one that they love, but always find in their way. Perpetua is not a pencil but the perfect synthesis of everything I wanted to say, do, and demonstrate when I founded Alisea in 1994. It came to life in 2014, after almost 20 years of daily work focused on giving a second chance to the inevitable waste of industrial and artisan production of companies, and create for them the most diverse design objects. I owe a lot to Perpetua: thanks to her we started the process of internationalization of Alisea, thanks to her we took away from the landfill more than 24 tons of graphite powder discarded from industrial production and finally, thanks to Perpetua, today we are present at the MoMa in New York and I have become an inventor... 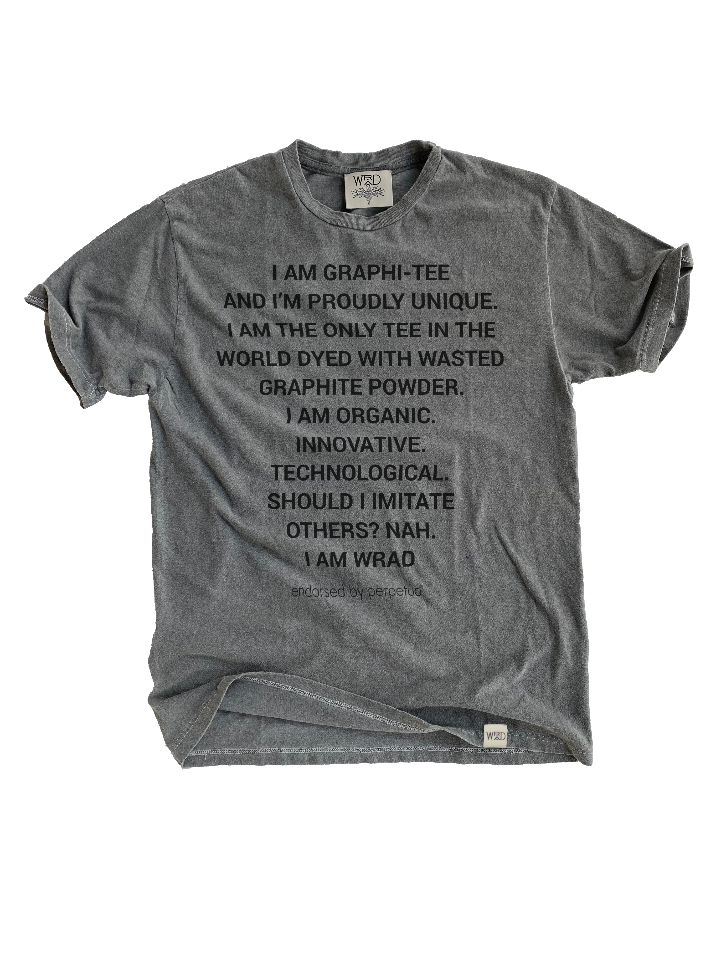 6. WRAD GRAPHY TEE, the first T-shirt dyed with recycled graphite As Perpetua is not a pencil, my WRAD GRAPHY TEE is not a T-shirt, but represents the passage of my experience and know-how to the new generations. It is 2015 when I meet Matteo Ward, 28 years old, son of a friend. He had 6 years of a dazzling career in Abercrombie & Fitch and had just left the company behind, because after working in the magical world of fashion he realized the enormous environmental damage that the world he loved so much was causing to the entire planet. Matteo has set himself a goal: he wants his peers to know what he has discovered and seen and decided to become an active part of a change he felt was urgent. Wrad was born, Innovative Start up, which has the declared aim of contributing to the change of the status quo starting from the fashion world. That's how Wrad's first child, GRAPHY TEE, was born, using an innovative treatment for dyeing fabrics with recovered graphite, the same as Perpetua the pencil.  A product patent and a production process crated by my company, but... now all for them.