Colli's story is one of a unique entrepreneurial adventure, the result of brilliant intuitions, of an innate taste for beauty and of the courage to confront the world. From this adventure, very refined furnishings came to life, ranging from Art Deco to the 60s; and even though the company is now extinct, its creations are alive more than ever, thanks to the vintage market, as well as being followed by great collectors and by the latest generation of enthusiasts from all over the world.

Why does Colli's style conquer contemporary taste? First of all, each piece is tailor-made: even when a type of Colli's furniture was proposed to various customers, it underwent changes to adapt to different contexts. Drawings and documentation indicated these changes, which is why Colli's furniture ignites the interest of fans of the genesis and path of a piece of furniture. How do we recognize a Colli's piece? The brand has lived through several eras, but the common denominator is the meticulous processing of the wood, elegantly decorated with subtle geometric carvings that stand out on the armrests and legs of tables and chairs, or on the doors of the sideboards. If we were to compare Colli's style to the personality of a designer, we could place the brand next to Gio Ponti: long-lived, dynamic, able to capture trends and changes while remaining faithful to its own style, without ever being too influenced by fashions.

And to think that it all started with the embroidery….! To reconstruct the story, we must take a leap back to the 19th century in Turin, a multifaceted city, in some ways controversial due to its austere and sometimes introverted character, but at the core of a creative drive: and if it is primarily known for its automobile industry, there was a time when Turin was at the height of fame also in the field of furniture and embroidery, thanks to the presence of two entrepreneurial realities.

On the one hand there was the MIRAM (Italian Hand-Made Embroidery Manufacture) founded by Pietro Colli in 1850, specializing in gobelin fabrics and bandera embroideries. His daughter Teresa traveled between Italy and Paris to discover the latest trends in fabrics and embroidery, while her younger brother, Pier Luigi Colli (1895-1968), the star of this story, joined the company in 1921. Distinguishing himself for his enterprising personality and willing to continue his father's profession, Pier Luigi was known to his contemporaries as "the artist interior designer", and had no doubts about his future: he moved temporarily to Paris, where he attended L'Ecole des Beaux Arts Décoratives.

The other great Turin manufacturer to be mentioned is Martinotti, founded in 1931 by Giuseppe Martinotti and supplier of fine furnishings for the Savoy court, pieces which were characterized by a typically 19th century eclectic style, generally made of exotic woods featuring ivory and tortoiseshell inlays: at that time, Martinotti represented the top of internationality, having even participated in the 1875 Philadelphia exhibition!

The two brands' fate merged in 1902, a decisive year for Turin which, hosting the International Exhibition of Modern Decorative Art, became the cradle of the spread of the Liberty style in Italy. In the exhibition, Martinotti exhibited an elegant interior, in which all the textile parts, from the curtains to the seat upholstery, was made by Colli. It was in 1926 that Colli (MIRAM) finally acquired Martinotti, founding a laboratory where, from the savoir faire of the two companies, complete pieces of furniture were created and tailor-made for the customer, from the structure to its upholstery.

Meanwhile, Pier Luigi Colli was living in Paris, the ideal place to be in 1925, when the International Exhibition of Modern Decorative and Industrial Arts brought him closer to the work of one of his putative fathers, the great French cabinet maker Jacques-Émile Ruhlmann (Paris, 1879 - 1933). Thanks to Paris, Pier Luigi intertwined contacts with the international beau monde, he started to import Lalique glass from France, while the Colli's clientele expanded and special commissions arrived, such as the creation of the Royal Train of the Savoy family made with Fiat, or the lecture hall in the University of Turin.

The success of a brand is also measured by its openness to establishing collaborations with the great designers of its time, in the case of Colli resulting in important creative partnerships: from Gio Ponti, who relied on the brand for his Richard Ginori project in Rome, up to Carlo Mollino, who created with Colli the handrails of the RAI (national TV) auditorium and the windows of the Teatro Regio in Turin; also in Turin, the Morbelli architects collaborated with Colli for the furnishings of the RAI skyscraper, and the architects Gabetti Isola for the interiors of the Stock Exchange in Turin.

In the 40s and 50s, having opened a branch in Rome, Colli was at the peak of productivity. The embroidery and textile section continued to be one of its strengths, keeping alive the relations with France and its great masters: among the inspirations were the geometric shapes of the fabrics of Ruhlmann's interiors, or the tactile carpets made by designer Mariod Dorn. And so, another Colli trademark become the "textured carpet", in which the decoration was not dictated by the design, but by the different height of the wool!

When Pier Luigi died in 1968, his daughter Claudia succeeded him; Colli2 was created, a collection of furniture designed by Guido Drocco and Franco Mello, authors of the iconic Catus for Gufram, while the artistic direction was entrusted to Giorgio De Ferrari. Collaborations continued with the most famous Turin designers, such as Giuseppe Raimondi, even if the production of the brand began to be a bit "behind" with respect to the mass production boom that had conquered the world in the meantime. The final decision was to maintain the brand ethic and identity, by limiting itto acting as a design studio, until the final closure, which took place in the mid-80s. 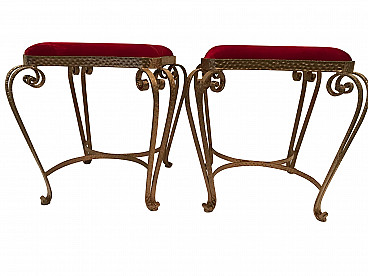 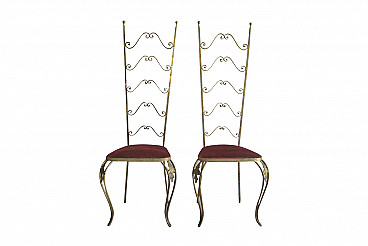 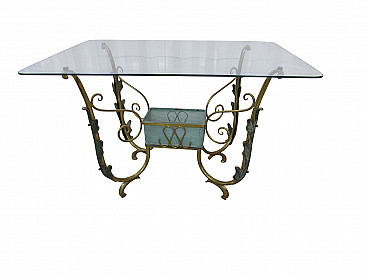 Coffee table in glass and brass by Pierluigi Colli, 50s 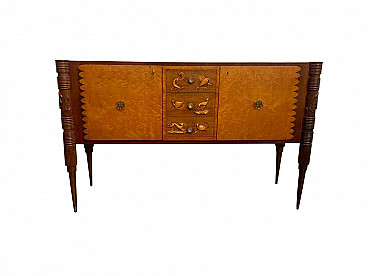 Sideboard by Pierluigi Colli in oak and maple, 40s 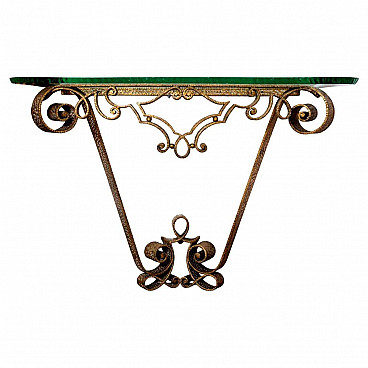