Born in the Baroque age, when rooms paired the canonical chandelier with light spots illuminating the walls, the wall lamp that evolved over the centuries, better known as sconce or, in French, applique, is one of the most sought-after design objects among vintage enthusiasts and collectors: when preparing to furnish a new home, it is difficult for the real cool hunter to ignore a 20th century lamp, especially if it comes as a pair of sconces in good condition.

Suitable for those who aim to optimize space, a wall lamp gives character to the wall and to the environment it illuminates while maintaining a highly functional role, whether it is a reading corner, perhaps placed next to the bed and with adjustable arms that orient the light, or to illuminate a specific area of ​​the living room; wall lights are also a valuable solution for hallways or service areas that could be darker than the rest of the house such as corridors (in the picture, Wes Anderson's Grand Hotel Budapest corridor), where appliques enhance the beauty of paintings and photographs.

In short, if professionally hung, the vintage applique will never convey the idea of a ​​too improvised or do-it-yourself décor, precisely because its position on walls and connection to electricity imply precision. At the same time, sconces belonging to past eras become the icing on the cake in spaces where vintage is synonymous with personality without risking to fall into the didactic, precisely because there are vintage appliques of every style, materials and tastes.

From the less valuable structures to the precious glass diffusers signed by the great Murano brands, passing through the piecese suspended between design and art which almost become wall sculptures creating unprecedented optical effects, it was during the 20th century, a very rich and varied era in which design masters have tried as never before to convey the importance of functionality, that the applique reached high levels of quality, both from a stylistic point of view and from a technological innovation side.

Nowadays, among flea markets and auction sales, the lion's share is done by lamps, in particular by appliques, even the very anonymous ones, as long as they are kept in good conditions. A great deal of interest is shown towards the finest examples of made in Italy appliques, generally produced by major lighting brands including for example Arteluce, Artemide or Fontana Arte. In the vast array of Italian brands that have made the avant-garde lamp their unmistakable trademark, there is a renewed interest in the appliques designed by Carlo Scarpa, Vittorio Gregotti, Lodovico Meneghetti, Giorgio Stoppino and Gino Sarfatti. Among the names to keep an eye on and rediscovered during the last season, stands out Sergio Asti, while Max Ingrand's creations in brass and crystal remain timeless classics.

And speaking of the most popular materials in the hunt for the perfect vintage wall lamp, just in case we wanted to pick a gift for our trendy interior lovers friends, the direction of taste seems to prefer brass, a material that is often emblematic of a particular industrial style which, in the middle of the last century distinguished the lamps by Oscar Torlasco and Sergio Mazza. Nowadays, brass is especially requested in its combination with opal or satin glass, which found one of its most convincing expressions in the mid-20th century creations launched by Stilnovo. 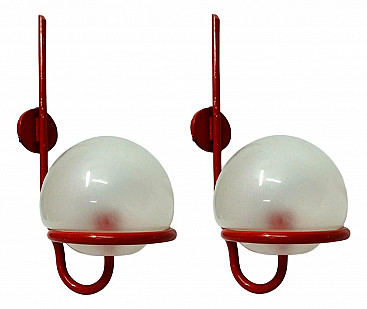 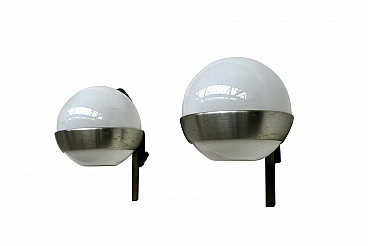 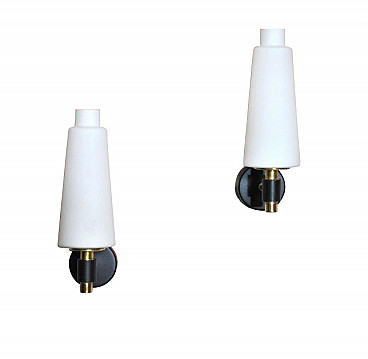 Pair of wall lamps in lacquered metal, brass and opaline glass in the style of Arredoluce, 60s

Pair of wall sconces in brass and painted metal in the style of Diabolo by Stilnovo, 60s