Life in plastic: can it be fantastic? | intOndo

Unmistakable, light, resistant! This is how the modern plastic, polypropylene, was presented in the 1960s, discovered by Giulio Natta in 1953 and destined to spread to homes all over the world. Crockery, bowls, containers: the novelty initially invested everyday objects, bursting into kitchens, living rooms and bedrooms with its ductility and resistance, together with its low cost.
These characteristics also attracted the attention of creative people, who saw in plastic an opportunity to bring about a process of democratisation of their productions, often characterised by prohibitive costs and therefore reserved for the few.

Thus, collaborations between industry and art were born, as in the case of the companies Kartell, Vitra, Artemide, Zanotta and others who began to produce furnishing accessories in coloured plastic, with unexpected and amusing shapes. Together with visionary designers - such as the Mackintosh couple, Marco Zanuso, Antonio Citterio, Philippe Starck, Gae Aulenti, Ettore Sottsass and many others - the companies created something revolutionary, and it is not for nothing that we speak of a Plastic Revolution. Especially chairs and seating in general (the protagonists of this week's intOndo newsletter) became a field of experimentation with shapes and colours, also thanks to the Space Age style in vogue in those years, which together with Pop Art shaped an entire decade, and to some extent the following ones.

Beauty, creativity and functionality are the keywords that drive this revolution and help create the imagery of the modern, fast and practical lifestyle. In fact, plastic proved to be the perfect material for the consumerist mentality of the last century: quick and easy to produce, adaptable to human needs, cheap. This modern plastic fever continued for decades, prospering cities, industries, families, becoming more and more pervasive in our lives: to this day we are completely surrounded by plastic, the very clothes we wear are often made of synthetic fibres derived from plastic.
Plastic is now everywhere, and only a few years ago we suddenly realised that it is not such a good thing

Humanity has woken up after a decades-long plastic intoxication, and the hangover is tremendous: every year we produce around 340 million tonnes of plastic, and between 4.8 and 12.7 million tonnes end up in the ocean, a number that scientists say is set to double by 2025. Since 2015, we have gone from having zero awareness to a kind of generalised shock, where everyone wondered if perhaps the use had not become excessive. The problem is certainly not the material, indeed very versatile and undeniably convenient, but the mentality with which it has been abused. In recent years, governments and associations all over the world have been running for cover: single-use plastic has been banned, plastic straws are a vague memory and shopping bags too. Companies have introduced recycled plastic collections and there is a general commitment against overuse.

Between pros and cons, the truth is that plastic was the emblem of the era of consumerism, an era that was certainly carefree, fun, where everything seemed due and possible. But today we are in the midst of a crisis and the time has come to give back everything that was taken, consumed and thrown away in the last century. So much for the nostalgics, the deniers and the young, who find themselves paying the bills for an era they did not even live through.

Pair of armchair in plexiglass Toy Chair by Rossi Molinari for Totem, 1968

Isotta lamp by G. Gentile for Sormani in glass and thermoformed plastic, 1971 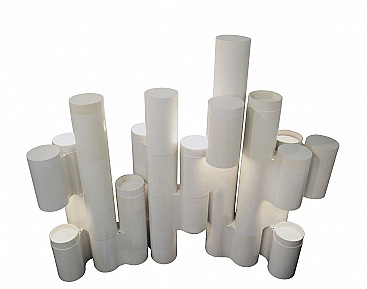