4 Iconic tables that have made design history | intOndo

Finnish-American architect Eero Saarinen had clear goals when it came to designing furniture: "The design must be classic, in the sense of responding to an often recurring need." One such need emerged in the mid-1950s, while he was designing a dining furniture collection (later called Pedestal) for Knoll: with this new collection he was trying to solve the problem of the "leg slum" as the architect called it, referring to the impractical supports he observed in the chairs and tables of his time. He devised a design for a chair with a pedestal base that would be aesthetically beautiful and functional, replacing the visual intertwining of legs with a single base, and gave it the name Tulip, given its resemblance to the flower. In 1956, Eero Saarinen also created the table that solved the same problem of chair legs, to be used as a dining or living room table, forming together with the chairs a combination of exceptional practicality and beauty. Soon after its introduction in 1957, the Tulip table (or Pedestal table) was everywhere, from modern homes across the nation to commercial interiors.

One of the few tables designed by Le Corbusier, the LC6 table is a rare classic of its time. Designed in 1928 for Cassina by Le Corbusier in collaboration with his cousin Pierre Jeanneret and the young designer Charlotte Perriand, the LC6 table is part of a collection of furniture with original and highly functional forms. It features a base with round tubular steel legs, similar to the spacers between the wings of a biplane: in fact, the idea behind the LC6 table lies in the distinction between the load-bearing element and the carried element, between the base and the top. The autonomy of the two parts is highlighted by the four intermediate supports that act both as level adjusters (it can rise up to 5 cm) and as spacers between the support and the slender lines of the top. A unique contrast of lightness and weight, of volume and transparency.

The Nomos table, designed in 1987 by British architect Sir Norman Foster, is a multifunctional table designed for maximum flexibility, intended for use in both office and home. Like Foster's building designs, the aesthetic effect of Nomos is based on its structure, in this case the angular metal frame for which the table has often been compared to a lunar landing craft. However, Foster also compared it to the slim body and long, slender legs of the grasshopper. This anatomical analogy is echoed in the "vertebrae" of the table, whose structure resembles a zoomorphic skeleton running the length of the table, easily accommodating the cables and wires so prevalent in modern offices and homes.

Ironic and irreverent, Gae Aulenti's Table with Wheels was born, like all the best design objects, from observation. Artistic director of Fontana Arte, Gae Aulenti observes the industrial trolleys that transport glass to the company and creates a fantastic crasis: he combines the four excessive industrial wheels with a thick sheet of glass, a tribute to the company that specializes in the production of furniture objects and glass processing. In creating the Tavolo con Ruote, Aulenti was guided by an intuitive design, born from the association of everyday tools and transformed into a prototype without going through drawing. A creative mode that openly echoes the spirit of Marcel Duchamp's ready-made: the nature of the object and its intended use are transformed, following an obvious operation of contrast enhanced even more by the visible nut that fixes the wheels and deliberately protrudes from the glass top. 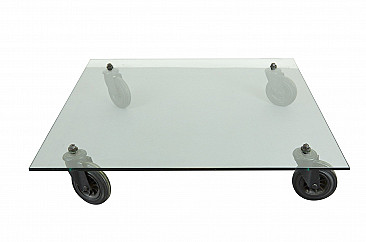 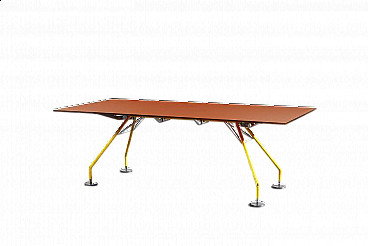 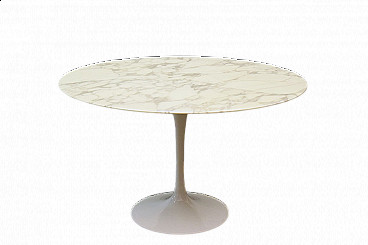 Tulip round table in marble by Eero Saarinen for Knoll, 60s