In the field of furniture, there is a strong tendency that pushes the formation of collectives: unions of forces and minds that, often coming from different disciplines, dedicate part of the work to four hands projects, as well as sharing ideas, ideals and life moments. Whether they are defined as communities, aggregations or schools, there are many phenomena of this kind in the history of furniture, from Memphis and Studio Alchimia in Italy, from the Bauhaus in Germany to the Arts & Crafts movement in England, up to the Glasgow School in Scotland.

Based in Michigan in the United States, the Cranbrook Academy of Art was a sui generis cultural community; less popular compared to other communities, it was nonetheless the forge of some of the most revolutionary ideas of the concept of living. It was here that Eero Saarinen studied, and it was here that Charles Eames met his future wife, painter Ray Kaiser, with whom he would form the most acclaimed American designer duo of the 20th century. It was here that sculptor Harry Bertoia glimpsed the possibilities of metal wire to make chairs; and it was here that great entrepreneurial design adventures were born, such as the one between Florence Schust and her future husband Hans Knoll, the founders of Knoll International.

Unlike other aggregations, the Cranbrook Academy of Art was born from the will of a single individual who financed the whole enterprise: the magnate in question was George Booth from Detroit, Michigan, a publisher and philanthropist. Driven by his innate resourcefulness, in the early 20th century Booth moved to Bloomfield Hillswith with his wife Ellis and their children. The idea was to build a country residence that over the years would host a cultural community inspired by the American Academy in Rome: 300 acres of land that he called Cranbrook, from the name of the English town his family descended from.

Today, consisting of an art college, a museum and several academic laboratories, after a period in the shadows, the Cranbrook Academy is back on the crest of the wave. However, its Golden Age remains the period from the 30s to the 50s, decades that critics have often described as the American response to the Bauhaus and Arts and Crafts.

The comparison works if one thinks of Cranbrook’s progressive vision of culture applied to design, as well as its being a turning point in design history. At the same time, differences with the aforementioned movements emerged: the Bauhaus had to face highly complex realities, first of all the rising of Nazism, which caused its tragic closing in 1933. Unlike the Bauhaus, which focused much of the production on a recognizable style and materials, such as Marcel Breuer's tubular steel, Cranbrook promoted a multidisciplinary approach, ranging from furniture to painting, from ceramics to textiles and all types of metal: versatility was a requirement, experience counted as much as technique, eclecticism and freedom to use decorations and ornaments could prevail over rigor. These factors draw analogies with the Arts and Crafts even if, unlike the English movement, Cranbrook’s designers thought almost exclusively in terms of industrial mass production.

A 1984 NY Times article paints a precise portrait of Cranbrook Academy, «not an art school in the common sense, but a workplace for creative art. The main idea is to have very highly skilled artists who live in Cranbrook and perform their work there. This rich and creative atmosphere will bring to Cranbrook young artists and art students eager to develop their talents». It is curious that “art” and “artists” are mentioned regarding the production of furniture and architecture.

To pronounce these words was the first artist, and architect, called by George Booth to design the landscape, campus and buildings of Cranbrook Academy: the Finnish Eliel Saarinen, (Eero's father), who had just moved from Finland. The rest is history. Being one of the leading academics who taught at the Academy, Eliel also built his own home within the campus; his wife, Loja Saarinen, headed the textiles department, from which a magnificent series of Art Déco inspired rugs, tapestries, curtains and upholstery was born. The Saarinens House at Cranbrook (the photograph shows one of its main rooms) is an interior design pearl combining elegance and simplicity: a mix of Arts and Crafts taste and typically Nordic essentiality, illuminated by touches of precious Art Déco inspired details.

Take advantage of our spring promotion! 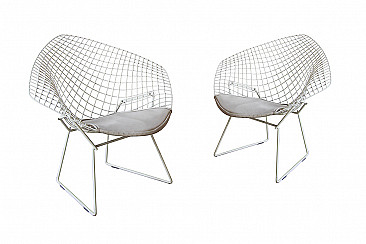 Pair of "Diamond" armchairs by Harry Bertoia for Knoll 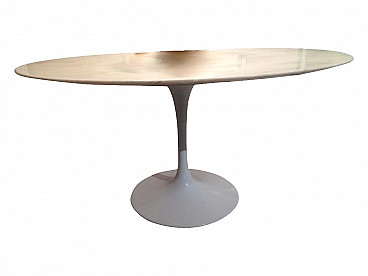