The Biedermeier style is a decorative and furniture style that originated in the early 19th century and developed in Austro-Hungary, Germany, Austria, and Northern Europe after the defeat of Napoleon and the Congress of Vienna in 1815. While much of Europe was beginning to move away from the Neoclassical style toward more romantic and elaborate styles, the Biedermeier style is based on the combination of simple concepts: functionality, linearity, and elegance.

The term "Biedermeier" originally took on a negative connotation: the word Biedermeier was derived from the name of a simpleton character in a play by Ludwig Eichrodt, and was intended to denote the conservative bourgeois concerned only with his own family reality. This negative view was due to the slow but inexorable development of the middle class, which began to grow and establish itself as a significant part of society during this period. For the first time, the middle class constitutes a noteworthy financial force, a class with real purchasing power. As a result, artisans also begin to produce furniture for the middle class during this period.

The increased wealth of the middle class also had a significant influence on family life and private activities, such as epistolary correspondence (which brought secrétaires to the forefront) and the pursuit of hobbies. People spent more time at home and, as a result, desired more comfortable domestic spaces. Indeed, Biedermeier sought to be beautiful without appearing ostentatious, and much of the aesthetic focused on how furniture functioned in the context of the home: thus we find armchairs and sofas with curved, light lines, plain-colored upholstery, and furniture such as dressers, buffets, and chests of drawers becoming more minimal and elegant. Biedermeier design and furniture thus reflect a focus on a strong middle class that was more focused on private life and domestic matters than the noble class. As a result, it is a comfortable and economical design, perfect for modern life, without the excessive ornamentation and ostentation found in other more antique styles, while retaining the elegance of an antique piece of furniture.

Stylistically, Biedermeier furniture toned down the rigidity and opulence of earlier styles such as the Empire style, which was characterized by exotic and precious woods such as ebony and mahogany. The result was a simpler, relaxed, and more informal furniture, recognizable by light, native woods such as walnut, pear, and cherry. Craftsmen did not need to import these natural German woods, and as a result the furniture was more affordable for the middle class.

Biedermeier furniture is also characterized by restrained ornamentation, often in the form of subtle geometric decorations emphasized by contrasting gold or black lines, lines that almost seem to anticipate the features of the Art Deco style. Precisely because of the simplicity of the decorations, restrained proportions, and elegant lines, Biedermeier is a relatively understated style that can be integrated into a home with modern furnishings or design projects. Get inspired by intOndo's collection of Biedermeier furniture! 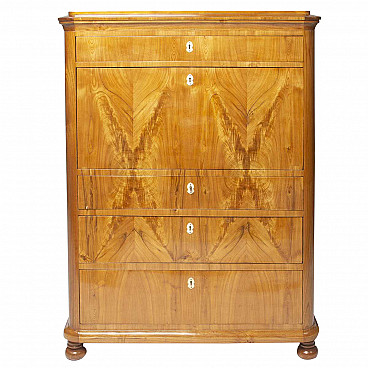 Secretaire in elm with 4 drawers and flap, 19th century 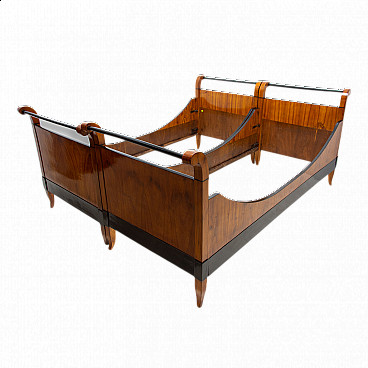 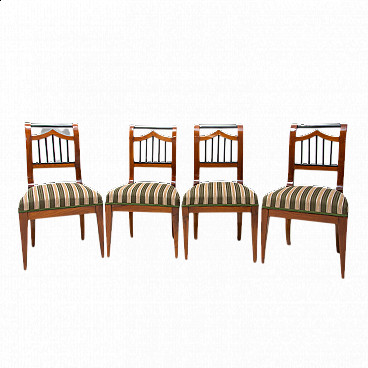